A troupe of physie girls from Penrith city travelled to Beijing, China where they represented Australia and Physical Culture in a cultural exchange event called “Fitness Exercise Performance of International Sister Cities of Xicheng”. Penrith has a 10 year relationship with its sister city Xicheng in Beijing. This is the first time that physie has had the opportunity to be showcased overseas.

The event was organised by the Chinese Government in the lead up to their hosting of the 2008 Olympics “to deepen the mutual understanding and friendship between the people of Xicheng and her sister cities”.

The BjP physie girls were aged 16-30 and came from four different clubs. While in Beijing the girls had a fantastic learning experience and were shown the city sights including Tiananmen Square, The Forbidden City and The Great Wall of China as well as sampling all the local delicacies, experiencing the culture first hand and meeting local Chinese people. 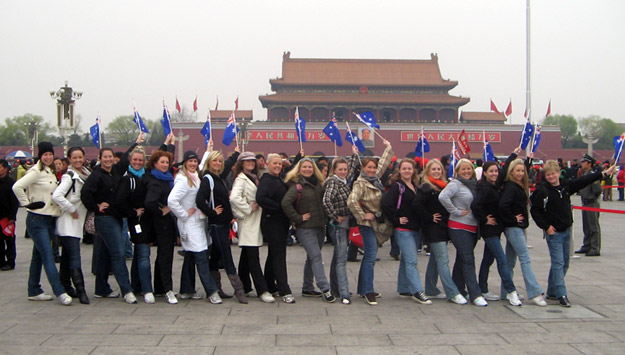 Chinese performances included tai chi, folk dancing, martial arts and dances with swords, fans and balls. Although similar to the Chinese physical culture, our performance had a more modern flavour with a stronger aerobic and contemporary dance element. Our choreography and music were well received and the girls were very popular, being asked to pose for at least a hundred photographs with various other troupes! We also performed with the Chinese and Japanese in a mass display that appeared on Chinese television.

As Penrith and Xicheng cities continue as sister cities, we hope that there will be many more cultural exchanges in the future. 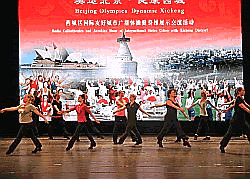 “I love the fact that the sport I love so dearly “Physie” has been given this amazing opportunity via the Penrith Council to display our sport and skills to the world. As a 7 year old walking into my first Physie class I never thought I would be in front of an audience in China doing Physie 26 years later”.
Colleen MacMurray (Penrith Physical Culture Club)