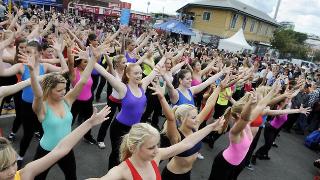 The secret’s out! The physie girls have been rehearsing for a surprise flash mob, performed at the Ekka Show in Brisbane yesterday.  Crowds were shocked and wowed when the girls all started dancing and, by the end of the routine, they were cheering.  Here’s a youtube clip link: http://www.youtube.com/watch?v=flvTiH-0J_s

The dance featured girls from BJP Physie clubs all over Brisbane including Wynnum, Manly, the Gold Coast and even as far south as Casino.  The team performed at about 1pm on Gregory Terrace outside the Strawberry Sundae shop. Wynnum Physie teacher, and one of the performers on the day, Kerrianne Skiathitis, said it was the surprise element that she loved most about the performance.

“That’s what makes it so exciting,” she said.

“The audience doesn’t know when or where we will pop up, the girls were pumped.”

Dancers in the group were as young as 11 and the performance was choreographed by Emma Sadd whose own dance troupe will be featured in Channel 10s Everybody Dance Now.  www.everybodydancenow.com.au

To read the article, go to: http://m.couriermail.com.au/questnews/east/ and click on “Ekka crowds stunned by flash mob”

Huge thanks to all the BJP physie girls and their teachers who participated and to Emma Sadd for her choreography.