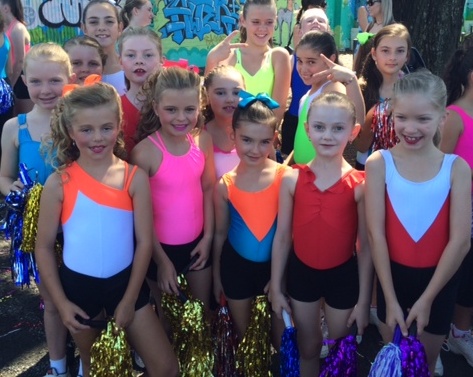 “On Saturday 22nd March, 65 girls from Penrith, Nepean and St Clair Physie clubs took part in the Penrith Festival Parade and stage performance. Amongst the 150 stalls on the day was the Physie Booth, giving out information about physie in western Sydney.

The theme of the parade was ‘Vintage’ so the girls were ablaze with colour and pom poms marching up the main street of Penrith behind a miniature Fire Truck which had all the little 5-6 year olds inside. Kim from Nepean and Lyndal from Penrith got to ride with the girls while the rest of the girls marched behind. Out in front were two older girls proudly carrying the new BJP Banner.

Later in the day the 7-12 year old girls were invited to perform on the Children’s stage and they put on a great show. There were lots of people around to watch and the girls were complimented on how well they performed.  All the girls were very excited and can’t wait for next year….”  Karen Allan