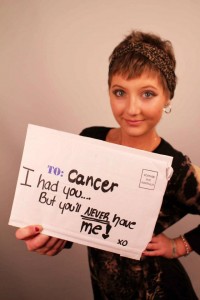 16 year old Jessica Olson, from Menai physie club, entered a competition earlier this year to be Girlfriend Magazine’s “Girlfriend of the Year”.  This national campaign recognises the accomplishments of outstanding teenagers who are achieving extraordinary things.

After being diagnosed with cancer last year, Jess began working during her treatment with the Sony Foundation and CanTeen to raise awareness and funds to build adolescent cancer centres across Australia.

She became the face and voice of the “You Can” campaign, detailing her first hand experiences and hardships as a teenager to generous donors across the nation.  Jessica beat five other finalists to take home the title of “Girlfriend of the Year” and a $5000 cash prize, which she will donate to the “You Can” campaign. http://youcan.org.au/  She appears in the July issue of Girlfriend.

What an incredible accomplishment – her teacher and her club couldn’t be more proud of her.  From everyone at BJP, Congratulations Jessica!