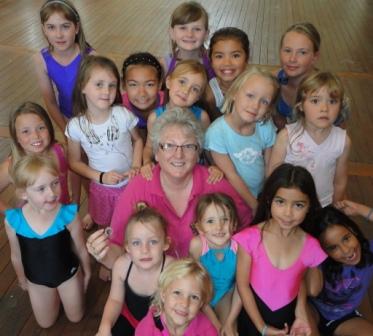 Lyn Creek, who has been teaching for BJP Physie for 24 years, was recently awarded a long service medal for teaching at BJP’s 120 Year celebration dinner.  Lyn’s physie success was reported in the Gloucester Advocate and Manning River Times.

Here she is surrounded by some of her physie “cherubs”. Lyn’s philosophy is that physie isn’t just about exercise and dance, it’s about connecting each week with friends and being part of a network that stretches across the country.

The article is reprinted below…

“It’s not every day you get to go to a 120th birthday Party!  But local Physie teacher, Lyn Creek, attended Bjelke Petersen Physical Culture’s celebration of this very special milestone at the Drummoyne Sailing Club recently.

1892 was a busy year.  Viruses were discovered. The first meal was cooked on an electric stove.  Thomas Edison got a patent on the first two-way telegraph.  Rudolf Diesel invented the diesel engine. Tchaikovsky premiered “The Nutcracker”.  And in Hobart, Bjelke-Petersen Physical Culture was founded.

Physie has undergone many changes in its 120 year history, surviving two World Wars, the Great Depression and 27 changes in government.  But Physie survived because of the people who’ve dedicated their lives to the company over the last 12 decades.  Many of them are gone and many still fly the flag.

Lyn was one of 10 ladies honoured during the evening by being presented with a silver medal recognising her more than 20 years of teaching Physie in Gloucester, Taree, Stroud and Forster/Tuncurry.  3 teachers received their 30 year medals and one Sydneyteacher was recognised for an amazing 60 years as a Physie teacher!

When asked what it is about Physie that keeps girls and ladies, sometimes several generations of the one family, coming back year after year, Lyn answered, “Physie means many different things to the girls and women who belong to it, but we can all say that our lives have been made better by it.  And as teachers we are lucky enough to be able to enrich the lives of others too.”

“Physical activity is essential for a healthy life.  The sooner we develop the habit, the easier it is to maintain.  Taree-Great Lakes Physical Culture Club is the ideal environment to inspire this healthy habit in girls and women.  Our unique form of dancing teaches movement to music, discipline, posture and team work.”

“Girls and women love being social. With Physie they can exercise, network and have fun from the age of 3 up. Many pressures and traps are facing our developing girls. Physie can break the cycle of inactivity, self-criticism and unhealthy lifestyle that can affect many teenagers and women.”

“Taree-Great Lakes Club’s weekly Physie classes aren’t just about exercise and dance, it’s about connecting each week with friends and being part of a network that stretches across the country”.

BJP Physie is now planning their next milestone, a 125th Celebration. 1992 saw a huge event at Sydney’s Entertainment Centre to mark BJP Physie’s first 100 years.  What will 2017 bring?”