Physie ladies from all over have completed rehearsals for tonights Commonwealth Games Opening Ceremony. Rehearsals culminated with dress rehearsals on Saturday and Monday night in the stadium with an audience comprised of games volunteers, family and friends. It’s estimated that the crowd numbers exceeded 20,000 each night – not bad for a dress rehearsal! The excitement in the stadium was palpable; we can’t wait to perform for the final time tomorrow night! The ceremony will be broadcast live on Channel 7 and also streamed via their website and app.
Make sure that you tune in and look out for the physie girls!!!!

Meanwhile rehearsals are continuing for the closing ceremony which also has physie people in the cast.

With approximately 16 rehearsals completed per segment the cameraderie amongst the cast has been growing and new life-long friendships have been forged. Physie ladies from various clubs are looking forward to catching-up at the next interclub and zone competitions. Some non-physie ladies have expressed interest in trying physie now they’ve heard about it and have met some friends.

It’s been such a fabulous experience to work with choreographers and performers of international renown in an event of this scale.
We are so proud of the BjP Physie women that are taking part and we can’t wait to tune in tonight and watch the fabulous performance! 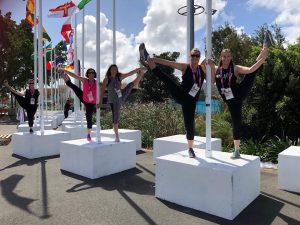 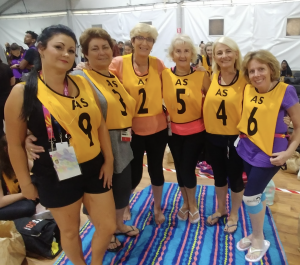