Q: Sheila you were recently immortalized in a mural wall in Eastwood – what was that about?
A: Ryde council were wanting to recognize local people who had contributed to the community for a long time.  I was nominated because I have taught physical culture in the area for over 3 decades and the next thing you know my face was up there on the wall!

Q: How did you first get involved in physyie? 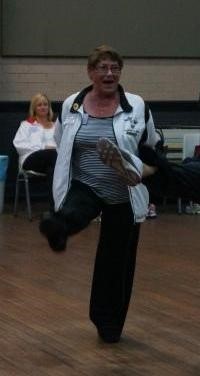 A: I used to teach ballet but, in 1964, I moved to Sydney and had children so running my own dancing school wasn’t an option.  Two friends introduced me to physical culture at Gladesville club and Mrs Doris Masters.  I went to one class and thought “I will never go back!”  But I was coaxed back by “Mrs M” asking if I would go in a team, which sounded a lot more exciting, so I decided to give it a go.  After all, I was meeting new friends, doing some exercise for myself and I found, to my surprise, that I was enjoying my nights at physie.

A: It’s not exactly a glorious one but… the first year that Ladies wore leotards instead of tunics in the late 60’s, I wore my best white undies and, unfortunately, they showed every time I did a sideways bend.  Mrs M was NOT impressed! L But then came the individual competitions for Ladies and I was ready for lots of fun but found that this was serious business!  I still had fun, won a medal and was hooked!

Q: How did you become a physie teacher?

A: By 1969 I was desperate to start teaching again so I told Mrs M that I was leaving physie to start a new dance school.  She immediately asked me to teach the juniors at Gladesville, where I am still teaching 37 years later!  She was a very hard ‘task master’ but I learnt so much from her and we became great friends.  I will always be grateful to her and my two dear friends for introducing me to this great sport!! 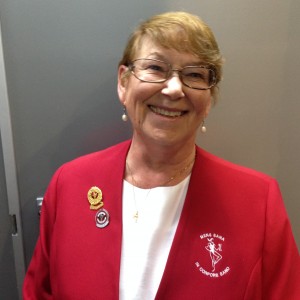 Q: What makes physie so special for you?

A:  It would have to be family and friends – I introduced my mother to physie (who taught in Culburra for many years), my sister, my daughter, my niece and my granddaughters to physie. I’ve also introduced many friends to physie – some stayed, some didn’t – but all of them benefited in some way from what physie have to offer.

Q: And what is that?

A: Fun, Fitness, Integrity and Friendship! Plus, where else can you start at 3 years and continue to 83?…. or more!