Ronda Robinson has been teaching for BJP for 50 years and was recognised in the “Generations” segment of the 125 Year Spectacular last June. Ronda teaches a large class of loyal ladies of all ages at The Hills Club. She has also been running the Pennant Hills Zone competitions for 30 years and will be handing over the reins of this volunteer role at the end of 2018.  BJP wishes to thank Ronda for all her years of hard work to ensure not only that our competitions run smoothly but that all the competitors and audience enjoy the day as well.  Here’s 5 minutes with Ronda…

Q: When did you start physie?
A: I started at Granville when I was 9. The teacher was Joan Stewart.

Q: How did you become a teacher?
A: There was an opening to teach at Epping club when I was 16. I had 8 years off when I had a family then another opportunity came up at Bethlehem West Pennant Hills club, where I still teach – different venue, same club! 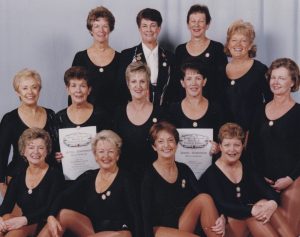 Q: What makes physie so special for you?
A: The long-term friendships.

Q: How has physie moulded you as a person?
A: It’s given me social skills and the ability to communicate with others.

Q: Who has influenced you the most?
A: Joan Stewart and Judy Spence.

Q: If you could go back in time, what advice would you give to your younger self?
A: Be patient.

Q: Do you have a favourite personal quote?
A: There are two.  The first one was from Judy Spence. One year the Opera House had reservations about letting us use the venue because of our “image”. Judy wrote this in her reply: “Our programme teaches sensitivity of rhythm and movement and is an introduction to many of the disciplines necessary for theatrical performance. Physie is an excellent introduction to the performing arts for girls from all socio-economic groups.
The second is Shirley Wolfson’s comments after our Centenary. She said “O what a night! People hugging and crying – not been seen for years. One big family.” That says it all really.

Q: Do you have a favourite routine that has stuck with you over the years?
A: The Dambusters and Memory (from Cats).

Q: What is your most memorable physie moment?
A: Competing at the National Senior Finals at the Grace Bros. Auditorium on Broadway.