Last week 15 girls from Southwest Physie Club aged between 7 and 16 years old performed at the Bunbury Show in Western Australia.
The girls had 4 rehearsals and were taught 2 new dances, performing them beautifully and showing the audience what Physie girls can do.  But most importantly…. they had FUN doing it!

Amongst the stalls on the day was the Physie Booth where the Southwest members advertised BJP Physie, giving out information about Physie in Western Australia. 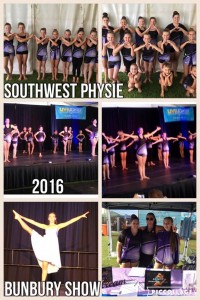 Bec teaches the Southwest Physie Club and she is very excited and proud to say that “Physie” is a word on everyone’s lips in Western Australia.

“This is our 3rd year up and running in Western Australia and so many people are talking about BJP Physie here in the Southwest. The last few weeks I’ve had many people come to me personally or send me messages saying they have heard about Physie and want more info. It’s so exciting as the first year no one had heard of Physie in Western Australia and now it seems everyone is talking about Physie!”

Congratulations to everyone involved! We love that you’re all out in the community sharing and demonstrating how great physie is and especially all the things that physie can give you.  Keep spreading the word about “Physie”!