That’s right you have to take the stairs. It was American author and motivational speaker Zig Ziglar who coined this famous quote. This guy was born in 1926, just before the Great Depression, grew up on a farm as one of 12 children and lost his father and a sister within 2 days of each other when he was just five years old. But he was a man who never gave up. In addition to public speaking, he wrote over 30 books.  His first book, See You At The Top, was rejected 39 times before it was published in 1975 and it’s still in print today. He really lived by what he preached. And that is: don’t expect an easy ride to success. Not only does it take hard work but you have to be prepared to fail sometimes along the way.

Mark Manson says it best when he explains that we often don’t see the work and failure that goes on in the background, we just see the glossy success of the finished product.

“Improvement at anything is based on thousands of tiny failures, and the magnitude of your success is based on how many times you’ve failed at something.  If someone is better than you at something, then it’s likely because she has failed at it more than you have. If someone is worse than you, it’s like because she hasn’t been through all of the painful learning experiences you have.

“If you think about a young child trying to learn to walk, that child will fall down and hurt itself hundreds of times. But at no point does that child ever stop and think, ‘Oh, I guess walking just isn’t for me. I’m not good at it.’

“Avoiding failure is something we learn at some later point in life… Mass media constantly exposes us to stellar success after success, while not showing us the thousands of hours of dull practice and tedium that were required to achieve that success.” 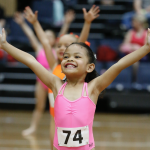 In Physie girls head off to their first competition full of enthusiasm and hope. But they can’t all win a prize. Often the more experienced girls take out the places. Here is the crucial moment where parents can choose between two messages: failure is bad and should be avoided or failure is okay because it’s one of the steps on the path to success. If a girl had the resilience to fall down a hundred times and still learn to walk, she has the resilience to not be a prize winner at Physie and never give up trying to be. Let’s not deny her this lesson – it will make her a winner in life.