Long before exercise became a growth industry, Bjelke-Petersen Physical Culture was keeping Australians fit and healthy. In fact, it’s been established in Australia for 129 years! Of course, what is done now is not the same as what was done back then. It’s now as contemporary as the music we exercise to and there is a strong dance element.

But the principles of the exercise are still the same: building aerobic fitness, muscle strength and tone, good posture, and increasing flexibility, balance and co-ordination.

Bjelke-Petersen Bros. began in 1892 as a medical gymnasium in Hobart started by Hans Christian Bjelke-Petersen, born in Denmark. (Sir Joh Bjelke-Petersen, former Premier of Queensland, was his nephew but he never had any association with the company.) The success of the gymnasium spread to Sydney and Melbourne and in the early 1900’s the group instruction method of physical culture was developed and taught in many leading colleges in Sydney to boys and girls. 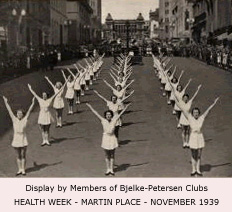 In 1923 the company moved to Castlereagh Street, Sydney and was based there for the next 59 years. From the early 1920’s Bjelke-Petersen was responsible for the physical education of children in some 80 private schools and classes began for young women in many business houses such as David Jones. Competitions began in the late 1920’s and junior classes commenced in the early 1940’s.

As the number of clubs increased, zone competitions were introduced, with State Finals held at the Grace Brothers Auditorium. When the Sydney Opera House opened in 1974, the Senior Finals were held there and have been a sell-out performance every year since.

In 2011, the company became a non-profit company and changed its name to Bjelke-Petersen School of Physical Culture Ltd.

See the list of Teachers who have received the 30 year Gold Service Medal.