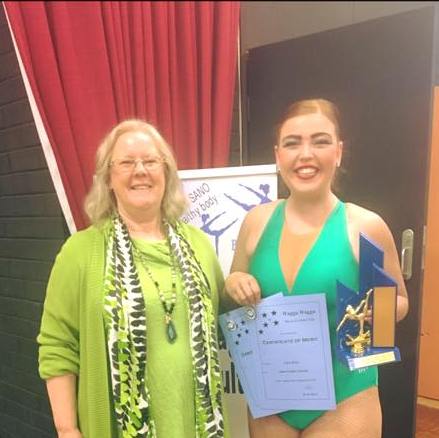 The Marie Thompson award for outstanding excellence is awarded to a student at St Martin’s College at Charles Sturt University who has shown outstanding achievement on a national or international level. The award honors the memory of Mrs Marie Thompson who was a member of the St Martin’s College Board from 1993 until 2004. Marie was an exceptional person who had a great love for young people and the arts.
Grace Juhasz from the Wagga Wagga club was presented this award for her success, passion and dedication to physical culture for the past 17 years.
Grace was a member of the Nepean Physie Club for 15 years and when she moved to Wagga in 2015 to attend University she was thrilled to join Wagga Physie Club. She has performed and placed in many team and individual competitions from the age of 5 up until now. Some of her feature successes have been a part of winning overall teams, making the final in her age group at several zone competitions and performing in Sydney and Parkes. Last year she was awarded ladies club champion for Wagga Wagga physical culture club. Not only has she displayed success in competitions, physie has also led Grace to perform at the Sydney Royal Easter show alongside hundreds of girls and in June she performed at the 125 year Bjp Spectacular at Qudos Bank Arena. She continues to model good behavior for younger girls and is a role model and well known member of her two clubs. St Martin’s College were very proud to award Grace with the Marie Thompson award of outstanding excellence and have wished her the very best for her competitions this year and her audition for the 2018 Opening ceremony for the Commonwealth Games.