SPECIAL ANNOUNCEMENT: BJP has been invited to perform at the Opening Ceremony of the Netball World Cup in 2015! 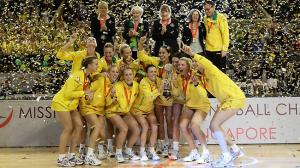 In August next year Sydney will host the “Netball World Cup” which is the sport’s pinnacle event, staged every 4 years. Netball in Australia has a proud heritage and our gold-medal winning team “The Diamonds” will be defending their World Cup title on home soil next year. The event will be held at Sydney Olympic Park between the 7 and 16 August, bringing together 16 nations from around the world to compete for netball’s ultimate prize. The Organising Committee for NWC2015 aims to create an Opening Ceremony the likes of which have never been seen in the world of netball.

Ex-Physie girl Jane Miskovic has been appointed the Creative Director for the Opening Ceremony. Jane has an international profile as a creative director and mass choreographer and has most recently worked on the Sochi 2014 Winter Olympic Games Opening and Closing Ceremonies and is now engaged with Cirque du Soleil on the 2015 Toronto Pan American Games.

Jane will invite up to 200 girls, seniors and ladies from BJP to participate in the Opening Ceremony. There will be particular roles available for physie girls who are also netball enthusiasts so it is time to brush up on those ball skills as well as your high kicks!

More details will follow early November, but please note these important dates for 2015:

Please don’t contact BJP at this stage. More specific information will be posted in November with information to register your interest. For more information check out http://nwc2015.com.au

We look forward to BJP showcasing amazing physical, performance and teamwork skills at this exciting international event. As netball girls say, “Here if you need!”