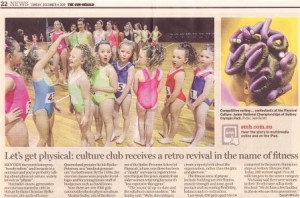 Last Sunday the Sun Herald ran an article about the BJP Junior National Finals.  It’s great to see the press getting more interested in our sport and to be written about in a leading national newspaper.

It seems that whenever we get press coverage, the journalists like to focus on the hair curlers and the grooming rather than the physie!  Perhaps this is because there is such a high level of public interest in the pressure on girls to grow up too fast and to look a certain way.

BJP has made a deliberate step away from the ‘fake’ glamour look for girls – fake hair, fake tan, fake nails and fake eyelashes are all banned under 15 years. We think that girls are already beautiful and don’t need unnatural enhancements to look good!

All girls love to ‘dress up’ for their performance and we support that tradition – the excitement of getting ready for a competition – a colourful leotard, a pretty hairstyle and some makeup make it fun and there’s nothing wrong with that.

What we would like to see more than anything is a place where girls can be themselves and not feel like they are judged for their appearance but rather for their physie and the hard work they’ve put into it. That’s what we’re about and will always continue to be…

One of the Herald’s journalists created a short e-documentary for the SMH Online. Click on the link below to watch it – and if you like it, share it!